You can get the full example from here: https://github.com/Cuda-Chen/opencv-config-with-vscode

OpenCV is a powerful tool in the area of image processing because of its speed and intuitive API. However, configuring OpenCV is a tough work especially on Windows.

In these days, I noticed a request about configuring OpenCV C++ with VS Code on PTT, which tackled my curiosity of how difficult it is to configure on Windows. After trying configuring for a morning and half of a afternoon, I finally completed the configuration and successfully compiling. For your ease of configuring of OpenCV on VS Code, I decided to write this post to teach you.

This tutorial assumes you use the following configurations:

The \\ delimiters are added in purpose.

Suggested by document of VS Code, you can install it by the following procedures:

In this part I choose Mingw-w64. Notice you should choose the following setting when installing: 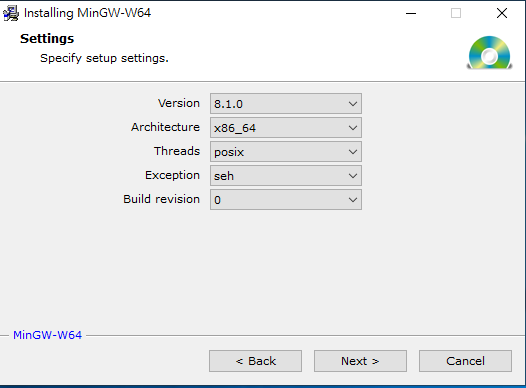 The reason of choosing these settings will be mentioned in the next part.

Download pre-built OpenCV package from OpenCV-MinGW-Build. Because we choose version 4.1.1, there are some specification of this build:

We can see the package is compiled with MinGW-x86_64-8.1.0-posix-seh-rt_v6-rev0. As a result, you should set the configurations of MinGW as same as what the package uses.

Below is an example to show the setting of environment variables. Taken from superuser:

For editing the Path variable, here are the processes:

I assume you install all of the OpenCV stuffs in C:\opencv\OpenCV-MinGW-Build-OpenCV-4.1.1-x64

5. Configure the .vscode files of your project.

First, create a new project called opencvexample. Then copy and paste the task.json, launch.json, and c_cpp_properties.json I created from this repo.

Note: currently I cannot launch debug mode in VS Code. Need someone to help me.

May. 17, 2020 update: thanks Tinashe Tanyaradzwa Mabika pointed that there is a typo in launch.json file, and I have fixed the problem!.

I also make some brief explanations of each json file and some changes I’ve applied.

This file tells VS Code to invoke the compiler to create an executable file based on the source code. I have made some alterations of command and args:

The launch.json file will launch the GDB debugger when you start to debug the program, and I change some lines shown below:

The c_cpp_properties.json lets you have more control over the C/C++ extensions:

6. Create Code, Compile It, and Run It

Create a file named main.cpp and paste the following:

Then put a image called lenna.jpg from here.

After that, compile the project and run it, you should get a window with Lenna image if there is no problem.

2020.04.06 added:
For building and running the project, you can press Ctrl+Shift+B to build and type the executable name to run in terminal. For more information, you can check this official guide.

In this posrt, I teach how to set up VS Code with OpenCV C++ package from scratch. Though the debug part cannot work, I successfully compile and run the program compiled with OpenCV.

Currently, whenever I start to run debug mode, I always receive this message box:

It would be glad if someone can leave a comment of e-mail me to solve this error :)

May. 17, 2020 update: thanks Tinashe Tanyaradzwa Mabika pointed that there is a typo in launch.json file, and I have fixed the problem!.