Image segmentation plays a great role in order to realize which objects construct an image. In order to reach this goal, people have invented a lot of strategies – one of which is superpixel.

SLIC is a well-known algorithm which runs in linear time complexity , and has been implemented in various image processing libraries including OpenCV and scikit-image. However, JulaImages has not implemented SLIC yet, though this Julia image processing package contains Felzenswalb and quick shift. Therefore, I want to implement SLIC in Julia to let me familiar with SLIC algorithm but also Julia.

Image segmentation is a process to classify which cluster each pixel should belong to. The goal of this is to let image more representative and easier for us to analyze. So far, people have invented a lot of techniques according to each characteristic of each object such as color, texture, and intensity, etc.

We use the properties of a pixel to classify which object it should belongs to. However, let me give you a question: is it proper to determine a range of an object in such small scale? Seems not. In 2003, Xiaofeng Ren and Jitendra Malik discussed about this problem and proposed superpixel. [1] The intuition of superpixel is pretty simple: rather than determine each pixel, we can group pixels with akin properties into a larger one – called superpixel – for further analyze. In this way, we not only get more meaningful regions but also improve computational efficiency. [2]

You will ask a problem: “It seems pretty straightforward. So what’s special of SLIC?” Rather than search all the pixels like normal K-means, SLIC uses a modified K-means which restricts the searching area into a certain space. To my opinion, SLIC adopts this way because each pixel surrounding to a center should have similar properties.

A comparison between normal K-means and SLIC modified K-means. Taken from [4]

And the simplified distance calculation is shown as follows: 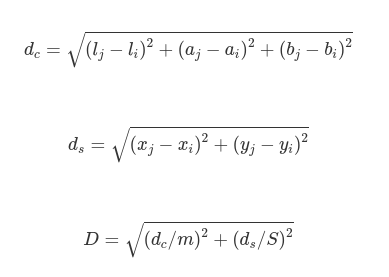 Where S = sqrt(N/K) (N represents the number of pixels.)

The following lines describe the algorithm of SLIC.

As a new-born language, Julia grasps my sight because it is fast, dynamic, and general. Though SLIC has been implemented in various image processing libraries such as OpenCV and scikit-image, there are no any implementations in pure Julia, which seems a pity that we don’t use the benefits of this programming language.

Just Show Me The Code!

Because it is lengthy, you can view the code here. Feel free to ask any questions if you cannot figure out :)

In this post, I introduce the concept of image segmentation as well as the history of superpixel. Next, I make an introduction of SLIC superpixel and the algorithm. Last, I express why I want to implement SLIC in pure Julia and leave the link of my implementation.

For the future aspect, I will work on enforce connectivity after we generate the superpixel.

Oct. 4, 2020 added: Heads up! I have added enforce connectivity in my Julia SLIC implementation!

This post wouldn’t appear if laixintao had not create this awesome and clear post (written in Simplified Chinese). I would like to give my gratitude to laixintao as a brick of this Julia implementation.